De novo proteins and where to find them - RosettaCon 2022

There has been a lot happening recently in protein design, and it is easy to get lost in the daily flood of new papers and exciting ideas (for an overview of current models and approaches see this review which includes a great model table). In such situations, it often helps to step back for a second, look at the bigger picture and chat to people about what is happening and what the future might hold. Luckily, RosettaCon was happening this August and provided a venue for exactly that: chat to people about protein design and fascinating ideas! In this post I want to highlight some presentations from the conference that I think are representative of some broader directions in the field. 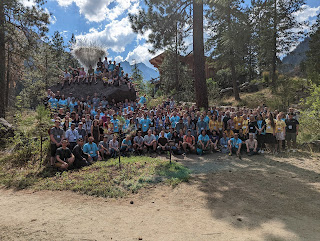 While complete de novo design of proteins is still the holy grail of the field, in practice you often want to incorporate a motif known from nature into a new custom-made scaffold. This motif-scaffolding problem can be quite tricky since the desired motif is often energetically unfavorable so that the scaffold is required to balance this out in order to form a stable folded protein. In this Science publication, a team from the IPD in Seattle approached this problem via two different deep learning methods: hallucination and inpainting. Both rely on the impressive advances in protein structure prediction in recent years. More explicitly, hallucination describes an iterative procedure in which the a protein structure prediction network repeatedly predicts the structure for a given input sequence. After this prediction, a loss is calculated based on both quality of the structure in general and recapitulation of the desired motif. This loss is then used to update the network and produce a better sequence, repeating this process until a desired performance threshold is achieved. On the other hand, inpainting treats the scaffolding problem as an information recovery task. Here, part of the sequence input is masked and the model is asked to predict this missing residues, generating novel stable proteins. This paper is not the only one to tackle this problem. There have been efforts to use diffusion models for the scaffolding problem as well as graph neural networks. All these approaches sound promising; time will tell which ones of these will be applicable to which design goal. 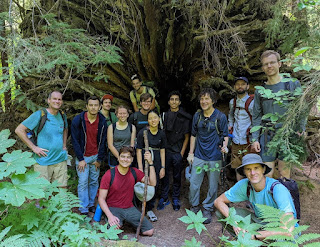 Another exciting talk by Vladimir Gligorijevic showcased some of the work that has been going on at Prescient Design and that has been published in this Manifold Design paper. The general idea of this approach (as you can see from the name) builds upon the manifold hypothesis, i.e. your high-dimensional data is normally not widely spread out in these dimensions, but is often restricted to a lower-dimensional manifold. Since functional proteins only occupy a small fraction of overall sequence space, thinking about protein design in terms of manifold sampling sounds like a reasonable idea and is what drove the recent advances in protein language models which basically learn to generate sequences that lie on this manifold of natural sequences (one of the early examples of explicitly formulating the problem in this way was this paper by Hie et al. from Stanford). But this team tackled the problem via a different approach: they built a Denoising Auto-Encoder (DAE) that takes as input a protein sequence, perturbs it and then generates a new protein sequence from there. The cool thing about that unsupervised approach is a separate supervised function classifier that predicts the function of the newly generated sequence based on Gene Ontology (GO) terms and therefore serves as guide for the DAE to generate sequences with the desired function. The team shows some pretty cool applications of their approach, from generating new Calcium-binding proteins to an ion transporter with a novel all-alpha fold (no pun intended), and that by starting of from a protein with an all-beta fold! In a follow-up paper they describe an approach to only design certain regions of the sequence, enabling workflows similar to the RFDesign pipeline mentioned above. All in all this seems like a promising way to generate very diverse sequences conditioned on function. 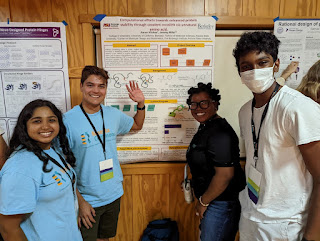 Generating custom antibodies binding to a specific target is already quite a feat, but doing it not only target- but even epitope-specific would be impressive. Nothing less is what Possu Huang presented at RosettaCon. They published quite some work on protein design and specifically backbone generation over the last couple years, using diverse approaches ranging from Generative Adversarial Networks (GANs) to language models. In 2020 they published a preprint on Ig-VAE, a Variational Autoencoder for generating antibody structures, and published the final version in PLOS CompBio this past June. This model is inspired by nature using a single antibody scaffold and adapting it to the problem at hand. They wanted to do something similiar in silico, so they chose to create a model with three important properties:

1. rotational and translational invariance should be maintained

2. the model should be aware of torsion angles since these are very important for protein structure and function

3. the output should directly be 3D structures and not an intermediate output such as distance maps.

With this new generative model, they were able to embed structures in a latent space and then sample from this latent space generating novel sequences. The direct output of structures made sure that there are no inconsistencies due to an overdetermined system and the invariance to rotation and translation meant that via this inductive bias they were able to circumvent the hassle of data augmentation for different rotational poses and directly learn a meaningful protein representation. Part of the team behind the paper has continued their work on protein structure generation since then and recently published a preprint in which they show that diffusion models can be used in a similar way to generate protein structures, showing again that novel advances in ML are often transferable to applications in biology. It will be exciting to see what the next breakthrough at this interface will be!

Neoleukin is one of several protein design companies originating in the IPD in Seattle. Their particular focus is therapeutic design with applications in e.g. cancer immunotherapy. Their lead candidate NL-201 is based on this publication in Nature in which they showed that this de novo protein is an effective activator of IL-2 and IL-15 agonist which means it can activate cells which express the receptor for this signaling molecule, for example NK or T cells that are important in immunotherapy against cancer. Other IL-2 based therapeutic approaches have been challenging in the past since they bind strongly to CD25, a subunit of another subtype of IL-2-receptor that is expressed in off-target cell types but which greatly enhances both affinity and activity of IL-2. Therefore, these off-target cells experience an even higher activation than the intended cell targets, leading to a plethora of potential side effects. Via computational protein design, they were able to create a protein that selectively binds to the intended subpopulation of IL-2 receptors, showing effective responses in immunotherapy studies. They now use several of the open-source available tools to optimize their designed sequences, which shows that protein design with machine learning is not a far-fetched dream, but actually already there!

The talks mentioned above show the breadth and depth of work going on in the protein design field, from combining established methods with new methods to the development of new algorithmic ideas. It was especially fascinating to see that de novo proteins are moving into the clinic and to the patient now since advances in disease therapy is the goal of many protein design projects. Finally, the collaborative and friendly atmosphere at the conference was exceptional; everybody took time for answering questions, helping others out and explain new advances in order to move the whole field forward. For me personally attending RosettaCon remotely was a great experience, and I hope to repeat this experience in person soon!

Thanks a lot to the organizers of the RosettaCon conference, both for making the conference a great experience and for allowing me to post this summary on their website and use their logo for the post on my website.

Proposal for the Future of Rosetta

June 17, 2022
Dear friends, colleagues, and supporters of Rosetta: I’m sure you are all aware of the rapid changes in our field of biomolecular structure prediction and design. Our Rosetta community has grown tremendously; our impact is rapidly extending into industry, materials, and the clinic; and deep learning is supercharging progress into the future.  I’m thrilled to share with you today a Proposal for the Future of Rosetta and to invite you to discuss it at our upcoming Town Hall : Thurs. June 30 Noon EDT = 9 AM PDT = 6 PM Europe = Midnight China Zoom link is on the wiki Here’s the history : Over the last several virtual RosettaCons, we have discussed the transformations in our field in “Future of Rosetta” breakout discussions. Then this past fall, a group of Rosetta scientists suggested that we should seriously consider shifting to a “free and open-source software (FOSS)” model to better position Rosetta as the standard platform for biomolecular modeling for all time. The Developer TeleCon
Read more

November 18, 2021
~ Contributed by the JEDI Committee Summer RosettaCon JEDI Session: Repacking the community At Summer RosettaCon 2021, we did not host an invited talk on Justice, Equity, Diversity, and Inclusion as we’ve done in previous meetings. Instead we facilitated a community-centered conversation entitled: Repacking the Community: defining what a Just, Equitable, Diverse and Inclusive Rosetta community looks like and proposing how to get there . Our call to action encouraged all Rosetta Commons members to join us for a discussion structured for productivity to arrive at a shared vision . Herein we report on the outcomes of this session, and discuss the top community requests and how we’ve subsequently actioned around these calls with a new set of task forces within the JEDI group.  What we did First off, a brief description of the session to paint a picture that explains how we arrived at our conclusions. The session was an hour, we met over Zoom, no surprises there. Ashley presented sli
Read more

September 08, 2021
~  contributed by Dr. Rocco Moretti SimpleMetrics in protocols By Dr. Rocco Moretti, Associate Professor, Meiler Lab, Vanderbilt SimpleMetrics are a flexible way to perform analysis on your structures. They are a much cleaner way of performing such an analysis when compared to the previous approach of commandeering the reporting functionality of RosettaScripts Filters. However, the initial implementation required that any SimpleMetric be accessed through the RunSimpleMetrics mover. This meant that using SimpleMetrics was sometimes more laborious than using an equivalent Filter, due to Filters being accessible directly from the PROTOCOLS section of the RosettaScripts XML. To make SimpleMetrics easier to use, a `metrics` attribute was added to the `Add` tags in the PROTOCOLS section. This way, adding a SimpleMetric report as a stage in the protocol is as easy as adding an additional Mover or Filter. One consideration in this implementation is how to determine the name under which the r
Read more